When the 2019 season began, Jameson Hannah was not in the Cincinnati Reds organization. The 2018 2nd round pick was beginning his season in the California League, playing for the Stockton Ports in the Oakland Athletics organization.

Things went quite a bit better in May. In the first 13 games of the month he went  18-51 (.353) with three doubles and four walks. The second half of the month was more of the same as he hit .298 with five extra-base hits and three more walks. For the month he posted a .327/.382/.418 line in the hitter friendly league. He added one steal on the month and was caught another time.

The hitting in May carried on over into June. Through the 9th he went 11-34 with five walks and six strikeouts. There was a small hiccup for three games that followed as he went 0-12, but then went back on a tear. In the remaining 13 games of the month for Stockton, Jameson Hannah hit .358/.433/.509 with seven extra-base hits. June would be the best month of the year for the center fielder, hitting .303/.389/.444 with 13 walks and 10 extra-base hits.

At the very end of July the Oakland Athletics traded Jameson Hannah to the Cincinnati Reds in exchange for Tanner Roark. The Reds sent Hannah to join their Advanced-A affiliate in Daytona. His first week with the Tortugas went well – going 8-27 (.296) with four extra-base hits. But he went into a slump in the final two weeks of the season, hitting just .175 the rest of the way.

For all 2019 Season Reviews and Scouting Reports – click here (these will come out during the week throughout the offseason). 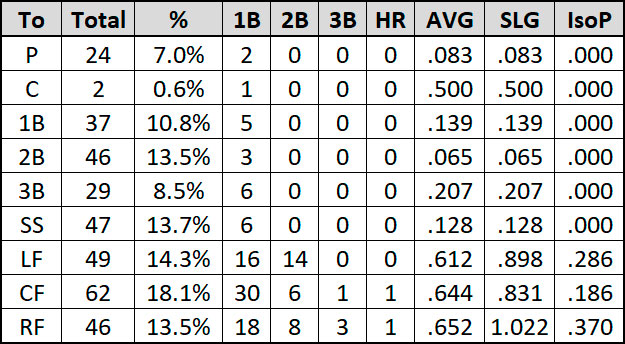 Power | His current power is well below-average, but there’s some raw power in there to tap into that could put him in that 12-15 HR range in the future.

Speed | He has above-average speed, but he hasn’t exactly used it well on the bases in his career.

Defense | He’s a solid defender in center field and can handle left field, too.

Arm | His arm is below-average and is what would likely keep him from spending much time in right field at the highest level.

There are some things to like with Jameson Hannah. He’s athletic – there’s good speed there, and while he’s short – he’s just 5′ 9″ – he’s not small. He’s got some strength on his frame. The raw tools at the plate are there. Toss in that he can play center field and you’ve got a good base to start with.

But there are some questions there, too. While there is some raw power in there, it’s going to take a big change to get to it. In 2019 he hit ground balls at an extremely high rate – 56% – and without a change it’s likely he’ll struggle to tap into that raw power and turn it into game power. His speed, while grading out well, isn’t used well on the bases. He was 8-for-16 in stolen bases in 2019. With his speed you would expect both a better ratio as well as more attempts.

If he can max out his tools, he’s got the profile for a starting center fielder. But there’s a lot of room between where he’s at now and that ceiling. There’s more of a 4th/5th outfielder type of likelihood in the profile than that of an every day player. The margin for a starting center fielder here is thin – he’s going to need to max out the hit and power, or get pretty close to it, to make it work.

Longest Home Run of the Year

He only hit two home runs on the year, and neither came with the Reds organization. That leaves me with no information here.

This article was first sent out to those who support the site over on Patreon. Early access is one of the perks that you could get be joining up as a Patron and supporting the work done here at RedsMinorLeagues.com.