It’s been a week, huh? Major League Baseball and Minor League Baseball both decided to delay the start of their seasons yesterday. You’re probably fully aware of that by now, as a whole lot of things in this country are shutting down to try to slow down the spread of the coronavirus/COVID-19. The Cincinnati Reds released a statement yesterday (read it here), and both President of Baseball Operations Dick Williams and Reds MLBPA Representative and catcher Tucker Barnhart spoke a little bit about things yesterday.

Things in Major League Baseball are uncertain. Some players have reportedly made it known that they would like to go home and be with their families while things are suspended, while some teams – at least for now – prefer the players to remain in and around the facilities.

There are some real concerns for the players and staff of these teams, both Major League Baseball and Minor League Baseball, who are wondering not only when they will get paid, but if they will get paid. Former Cincinnati Reds minor leagues (and former big leaguer with both the Angels and Cardinals) Joe Hudson responded to The Athletic/Baseball America’s Emily Waldon about how players are currently worried about this. 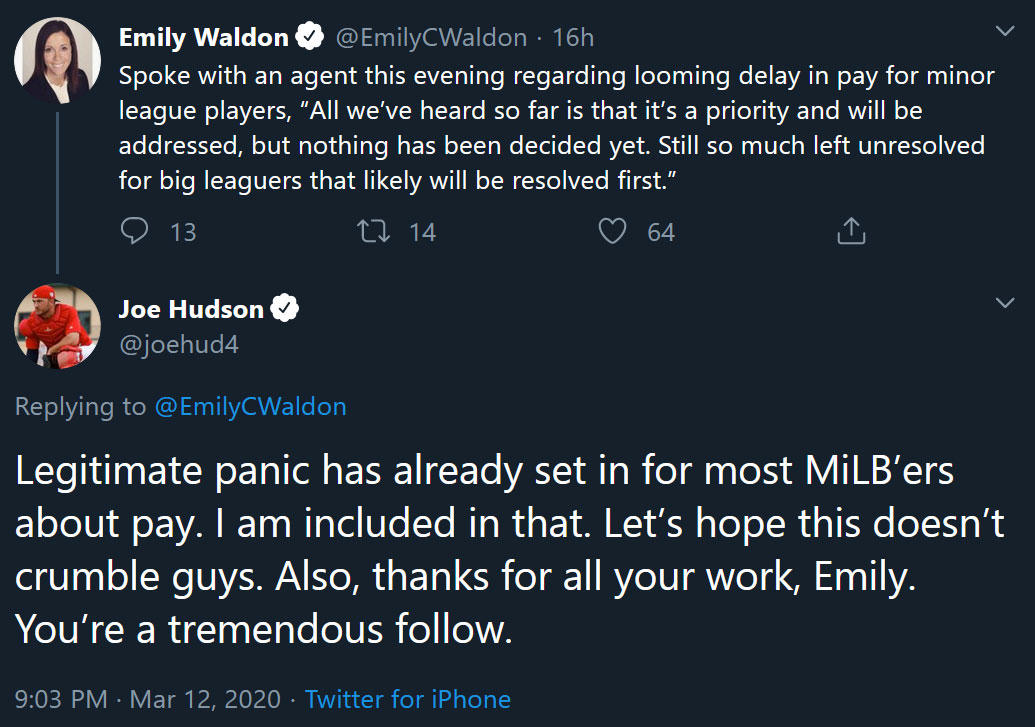 Minor League players haven’t gotten a check (for playing baseball) since last August. If you’re in big league camp you’ve been in Arizona or Florida, working, since mid-February. If you’re not in big league camp, you arrived there earlier this month with the idea that you wouldn’t even be paid for the first time until mid-April. And now that date is being pushed back unless teams step in to help keep everything pay-wise, on the same schedule.

But even beyond just the “will we get a paycheck”, there are things such as food and residence. Housing for spring training is either hotels or short-term leasing. How is that going to be handled? At the spring training complexes, teams are providing quality meals for the players. With the spring training complexes being shut down – at least temporarily – that’s an extra expense being potentially tossed at players that wasn’t expected, too. For now, even with the Reds complex being closed to everyone – minor leaguers were still provided their meals – according to Bobby Nightengale of the Cincinnati Enquirer.

And that’s just a few things with regards to the players. That is not mentioning at all the people who work within the industry of baseball. Beyond just people like me in the media, but people who work in and around the stadiums both in spring training facilities or even at the Major or Minor League venues around the country who now don’t have jobs to go to in the short-term and may have been relying heavily on that supplemental income for game-day work.

High School and College Baseball, and the MLB Draft

Many college athletics around the country have been suspended, and some cancelled for “spring sports”, which would include baseball. High schools are being shut down around the country, too – many of these shut downs also include sporting events.

While scouts have been following these players for years and have reports on them – the current year is far more important as a data point than anything that’s happened in the past. And as it stands now, the data point for the 2020 season doesn’t exist for many high school players, and for most college players there’s two or three weeks worth of games.

There are a lot of unanswered questions here. But let’s start out with college baseball – it came out today that the NCAA appears to be granting an additional year of eligibility for seniors in spring sports – which would include baseball. With regards to how that plays into the draft, it means that teams may not be able to “work the draft pool” nearly the same way that they have since it began – by drafting college seniors in rounds 7-10 and paying them $5-15,000 to sign and saving big time “pool money” to spend elsewhere in the draft. It gives those players more negotiating power.

Now, perhaps they aren’t going to want to return to school and try to enter professional baseball at 23-years-old next summer, which may as well be a death sentence for your career in many cases. But the option is there, too. The logistics for how that will effect scholarships (baseball only has 11.7 to share among the entire team), schools, and even the players still leaves a whole lot of questions with very few answers.

Will the draft be moved back? Could this be the situation that leads to an MLB style “Draft Combine” that they have reportedly been interested in having anyways?

There are so many unknowns at this point. We don’t have the slightest idea of when the sport will even be played again. And it may vary depending on which level of the sport we’re talking about. So many questions ahead, and for now, we’ve got next to no answers on them. Buckle up.