Today as we work our way through adding a bunch of new videos from last years travels around the Minor Leagues, we are getting to left-handed pitcher Andy Fisher. Last season he went undrafted out of Illinois, where he posted a 2.75 ERA as a senior in 16 starts. Over his 101.1 innings he allowed just 76 hits, six home runs, walked 35 batters, and he struck out 95.

The Cincinnati Reds signed Fisher as an undrafted free agent quickly following the draft and he was sent to Greeneville. The lefty didn’t stay there long as he showed he was too advanced for the level, posting a 0.87 ERA in 20.2 innings, walking just three batters and picking up 26 strikeouts. Cincinnati promoted him up to Low-A Dayton where he immediately made his presence known. In his first outing, a start, he threw 5.0 hitless innings – well, hitless outside of where he hit a batter – with no walks and eight strikeouts. He didn’t slow down much from there, either. Over 10 games with the Dragons – one start and nine relief appearances – he posted a 2.73 ERA in 26.1 innings with four walks and 32 strikeouts to finish out the year.

Between his two stops, the then 23-year-old put up one of the best debuts from the 2019 first year players in the organization. Andy Fisher threw 47.0 innings between his two stops with a 1.91 ERA, allowed just 31 hits and two homers, walked just seven batters, and he struck out 58. That’s getting it done.

When the Reds brought in Kyle Boddy to help them try to improve the way that they develop pitchers in the farm system, it was a breath of fresh air to many. It signaled that Cincinnati was going to try something different than what they had in the past – something that clearly wasn’t working. It signaled that the organization was trying to take another step forward in a more analytical and coaching approach – one we had already seen the fruits of at the Major League level.

Back in January, Boddy, who is now the Director of Pitch Initiatives and Pitching Coordinator for the farm system, spoke with Andrew Battifarano of MiLB.com about some of the organizations more well-known prospects, and what his new job was like. But near the end, he mentioned Andy Fisher, too.

“A guy that throws strikes, competes and has done a really good job and just might need to develop a few more tools,” Boddy said of Fisher, “that’s the kind of guy I want, rather than a guy with a ton of tools and needs to be refined as a pitcher.

“You’re not going to find much written about Andy Fisher, and that’s cool. And that’s what I like.”

And he was right. Head over to google and search for “Andy Fisher Cincinnati Reds” – spoiler alert: You aren’t going to find a whole lot. Blame me for some of that if you will, since I’m the only psycho out here on the internet consistently writing about the Reds farm system – but I’ll also point out that there are over 250 players in the farm system, so even writing about one different guy per day would barely cover everyone once a year. Still, my bad to all of the Fisher family.

I had been working on editing together some videos of guys the last few days (and I’ve still got plenty more to edit), but Andy Fisher was among the first ones I chose to do because he had simply been so dominant. It turned out to be an interesting situation last night as I was browsing twitter in the middle of the night while working on some other things when I saw a conversation between Kyle Boddy and a former prospect writer. 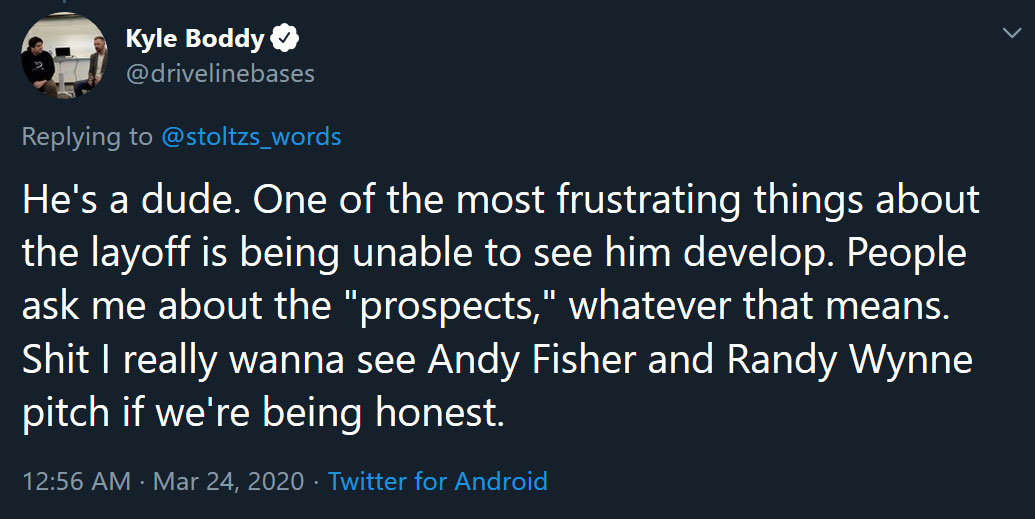 The conversation began about Randy Wynne, who in this tweet is the “he’s a dude” reference, but we get back to Boddy again praising Andy Fisher. And again – he deserves to be talked about more than he has been. That performance in 2019 was nothing short of outstanding.

The video is above from an early season performance with Greeneville. But Fisher spent plenty of time in Dayton, too – which is my “home ballpark” if I’ve got one. It’s where I spend more time than any of the other farm system stadiums – it’s just under an hour from where I live, so it’s easier to get to, doesn’t require a hotel stay, and I can decide on a whim to go to a game or not in most cases. That gave me more in-person looks later in the year with Fisher than I saw from most of the other guys who were in Greeneville earlier in the season.

With the promotion to Dayton, he kept on getting results. And he did so without much velocity on his fastball. I’m quite confident that he didn’t reach 90 MPH with his fastball. Fisher would sit between 86-88 MPH with the pitch while in Dayton – and those are the numbers from Trackman. Velocity isn’t everything. We know that, and we’ve kind of always known that – but velocity is a part of something.

As we’ve gotten into the “technology” revolution in the last 15 years with Pitch F/X, Trackman, Rapsodo, high-speed cameras – we’ve learned a whole heck of a lot of things that, mostly, back up what scouts have been saying about pitches for a long time. What we’ve been able to do, though, is put hard numbers onto many of those things. And with that, we’ve also been able to take some of these things that we can now put hard numbers on, and try to use things like the video to figure out, and ultimately teach what we believe makes those things happen to pitchers.

All of that brings me to a tweet from Reds pitcher Tejay Antone from Monday night, when he posted a shot of a bullpen session he had, where he was working on some things. He noted in the tweet that he’s trying to get his spin direction as close to 2:45 as possible to kill the lift. “Goodluck hitters,” he noted.

The 2:45, is representative of a clock. If you really want to get a more detailed explanation of what this is, here’s a solid video to check out that explains it.

The sinking action with a pitch at “2:45” that Antone is referring to in his tweet has the data behind it that shows that, yeah – it’s tough for hitters to elevate those pitches. It’s not so much because of anything special about the spin itself, of course, but what that spin makes the ball do that “tricks” the eyes and leads to a hitter hitting the top of the ball just a little bit more and thus the launch angle of the ball isn’t optimal and leads to grounders instead of fly balls. Again – this is something we’ve understood as a thing in scouting forever, we’ve just got hard numbers to put on this kind of stuff now.

All of that brings us back to Andy Fisher. As noted, he’s not exactly blowing guys away with velocity. Even as a lefty, he’s got below-average velocity with the pitch. But that pitch has a whole heck of a lot of optimal spin direction and movement. His fastball generally has the same spin direction as a pitch somewhere between a change up and a typical sinker – which to make it easier to understand, is saying that it has a lot of sinking action to it. Well above-average.

When it comes to the fastball, while the velocity works against Andy Fisher, everything else works for him. He’s got above-average movement with it. The pitch is one he can pound the strikezone with. And his arm angle helps him both hide the ball well, and give hitters a bit of a different look than they are used to. As with every pitcher who throws in the upper 80’s, it’s going to take a lot of things to make it work as he climbs the ladder – but there are reasons to think he’s got some of those things.

As for the offspeed stuff, if you watched the video above, you saw Andy Fisher’s slider in action. It’s possible that you also saw a change up in there (I didn’t track the velocity from the video, making it a bit tougher to distinguish the fastball and change up) – but there’s also a change up in his arsenal, though he uses it far less than the fastball or slider. Both the slider and change up work in that 76-80 MPH range.

Fisher just turned 24 this offseason. Age isn’t exactly on his side – but that matters far less with pitchers than it does with hitters for many different reasons. Still – assuming we get back to baseball in 2020, he could be moved quickly if his success continues.